What worth the new Korn’s single “Rotting In Vain”? Is the return of Head confirmed the resurrection of my boys? 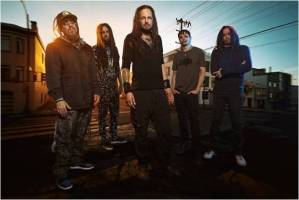 Some bands have an important impact on my musical culture, and Korn is one of them!
Even Though they had some issues during their career with Head (Brian Welch) leaving the band in 2005 – he was THE sound of Korn – which cause the release of some albums really not good at all! (Untitled album in 2007 and Korn III : Remember Who You Are in 2010, Two albums that they are for me totally pointless in their discography, even though The Path of Totality in 2011 showed a bit of originality with the Dub-step part), they managed to put things right with bringing back Head in the band in 2013!
After The Paradigm Shift in 2013, particularly promising and with the special touch of Head with the guitar sound and the power of his game, the new chapter is coming finally after a year or so of few information.
The Serenity of Suffering, 12th album form the Californian from Bakersfield is scheduled to be released the 21th of October 2016 on the label Roadrunner Records!!!!
This short musical note today (a new section) is here to show you the first single and the first clip of this new album with the song « Rotting In Vain »!

As you can see (or hear 😉 ), we have a comeback of Korn at their best with a track powerful and raging !
However, I have to be honest, especially for someone like me who knows quite well the Korn’s discography, this « Rotting In Vain » doesn’t offer something really original. The pattern of this song is similar to the older songs of the beginning of their career (before Head leaves the band):
Small notes at the beginning/it send heavy sound well known from the Korn history/break with a sound and Jon singing with a dark atmosphere/it’s go up again with the chorus really lyrical where Jon sing with a clear voice/small screams with a guttural type at the end it restart again.
The sequence is really classical for Korn before having (between 2:40 and 3:05) Jon singing with the same way than for the song Twist on the album Life is Peachy (with onomatopoeia and twitchy lyrics between).
Furthermore, they were talking on every interview about how brutal the new album will be, that they never did something so heavy. But, for me it’s not so heavier than usual. « Rotting in Vain » is the same type of song than Take a Look In The Mirror’s songs. It blow but it’s not so surprising compare to what they already done in the past.

Yet, let’s be clear! Even if I think the song « Rotting in Vain » is not so innovative, Korn is doing Korn music, it’s what we love and what we miss during the absence of Head!
They managed even so to regroup all the little thing that make their style – and that I loved them the first time I have heard their songs – in order to make catchy track with an incontestable power!
Personally, it’s not a problem for me they didn’t made something really original (The Path of Totality was enough :p), as long as Head give them back their powerful sound that they had in the past, with good and catchy songs, slightly dark like “Rotting In Vain”, I’m totally in!
Can’t wait for the new album, impatient to hear all the songs of this new delivery!
And you, what did you thought about this new track? Is it a good omen for the new album?

source
Artwork of the new album, always in the spirit of the first albums. Back to the roots seems to be the idea for the new album! See you in October 😉